In the midst of a typically depressing fall finals season in Providence, I escaped from my academic woes to the gym, December Bon Appétit in hand. Though someday I hope to change my ways, my motivation for exercise is generally procrastination. I tell you this, because otherwise I might look like a health-nut, and then it would simply not make sense why I decided, while huffing and puffing on the elliptical, to make a cake estimated at 1,235.9 calories a serving! Yes ladies and gentleman, you read that number right. (But keep reading, it was worth every future trip to the gym, albeit they are now necessary!

Anyways, back to the elliptical. Flipping through the pages, I finally turned to the gleaming, mouth-watering picture of this cake. My heart leaped, my eyebrows rose in excitement, and from that moment on, I was fixated. This cake became a beacon of hope to me, so tantalizingly close, to be made just after a looming physics final. My life could have been falling apart (and who knows, maybe it was!) but I had my cake to make, and it would succeed, if all else failed!

Fast forward to Christmas Eve. As my mother was shaking her head in skepticism (and perhaps pity) at the picture on Bon Appétit’s cover, I set to work on the cake layers. After several hours of blending batter, chopping pecans, melting chocolate in the microwave and folding in egg whites, I slid the 9-inch round cake pans into the oven. A little over half an hour later, they were done and cooling on the counter. I recommend checking the doneness of the cakes with a toothpick from 25 minutes on – my cake was not dry, but a lot of people commented on Bon Appétit’s recipe that theirs was, so it probably depends on the oven. Keep in mind that this is officially called a “torte,” with a consistency somewhere between your typical fluffy birthday-cake-out-of-a-box and a flourless chocolate cake. 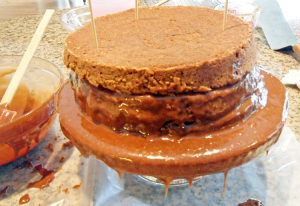 I used a hand-held mixer in a glass bowl, but the result was nothing like butter cream!
(Does anyone know how to produce buttercream that is thicker and lighter than what is featured in the horrifying picture to the right?)

Getting close to the end! For the glaze, I had to make a double boiler with a glass bowl on top of a saucepan. Sadly, the glaze was very thin, hardly the creamy looking coating I had salivated over on the elliptical. If anyone has recommendations for making a thicker glaze, please comment.

Last but not Least… The Ribbons!

Oh Bon Appétit. Why do you tell us to use fancy pasta makers when rolling out the chocolate with a plain old roller works just fine? I bought my mother a pasta maker for Christmas before I noticed the magazine’s recommendation to use one to flatten the chocolate dough, but this hardly turned out to be a fortuitous coincidence. All I can say is, don’t bother. Roll out the dough on a surface with plenty of powdered sugar to prevent sticking.

Then (and here you must summon every last ounce of your OCD-over-achieving inner spirit), use a ruler to carefully cut out strips of chocolate according to the recipe’s measurements. I cut the white chocolate strips thinner than was suggested, but this is your choice. To attach the strips of white and dark chocolate, I used corn syrup like it was Elmer’s glue – put it straight on your fingers and don’t use too much!

Next, I used vegetable oil to absorb the powdered sugar and make the ribbons shine. Then came the fun part – arranging the ribbons on the cake! Seven loops worked better than eight for my bow.

Note: When making the chocolate dough, do NOT melt the chocolate in the microwave. I thought I was being clever, but I had to redo the whole batch!

The final product wowed everyone present for Christmas dinner. If you are into impressive cakes that an amateur can make, this one is for you! But, the same visual effect could be achieved from three boxes of Duncan-Hines chocolate cake mix with chocolate frosting straight from the can, as long as the ribbons are as close to perfect as you can get them. I will say though, the cake had a memorable flavor, dominated by the powdered cloves in the batter, and the buttercream-rum-filling tasted heavenly, despite the mess it made!

The final product - after two days of hard work!

Here are some useful links:

The Recipe from Bon Appétit

And here are links to other bloggers who tried the ribbons:

Thyme in Our Kitchen

And some who created their own version of Bon Appétit’s beloved cake:

What’s for Dinner Across State Lines